Why the change? As Facebook’s product design director Geoff Teehan wrote in a post on Medium, not everything that’s shared is meant to be liked. The death of your friend’s dog or an article about an unsavory politician won’t just elicit a single emotion in users – -so why limit them to “liking” it?

The same is true for the posts brands publish to their Facebook accounts, which is why these new reactions are opening new doors for marketers.

Now that we’ve had some time to react to this new feature, we’ve done some thinking about the impact these new reactions buttons might have on both marketing and user behavior. In this post, I’ll first touch on how the reactions buttons work. Then, I’ll walk through a few implications for marketers going forward.

How the New ‘Reactions’ Feature Works

The new reaction buttons are already available to everyone — no need to enable their functionality. They’re also simple to use.

To react to a Facebook post on the mobile app, hold your finger on the Like button until the six options appear. Then, choose an icon by tapping on it.

The act of reacting may seem simple, but there are some nuances to the feature — especially regarding how to analyze it — that are relevant to marketers. Here’s what we know so far.

Reactions are counted the same as Likes. (For now.)

According to Facebook’s announcement, “if someone uses a reaction, Facebook will infer that person wants to see more of that type of post.” In other words, if you react to a post with the “angry” icon, Facebook’s algorithm will treat it as if it was Liked when deciding where to place it in a user’s News Feed. (Learn more about Facebook’s News Feed here.)

Why would Facebook’s algorithm treat an Angry reaction the same way they count a positive reaction like a Like or a Love? A study by Jonah Berger, author of “Contagious: Why Things Catch On,” found that content that triggered an angry reaction in readers is 34% more likely to end upon the New York Times “Most Shared” page, while posts that make people anxious are 21% more likely to end up on that page.

Keep an eye on this, though. In the future, Facebook may choose to rank posts differently based on their reactions. (In fact, some people are concerned Facebook’s already ranking posts differently and just aren’t telling us.)

As of right now, you can’t see the general trends of reactions on your business Page. So if you’re an administer for a business Page and you want to see the number of people who have reacted with a “sad” icon on a post, for example, then have to open the Insights page for that post directly. Also, that number is not currently broken down into organic versus paid, so you can’t see which reactions may be influenced when you boosted a post compared to which ones you garnered organically. 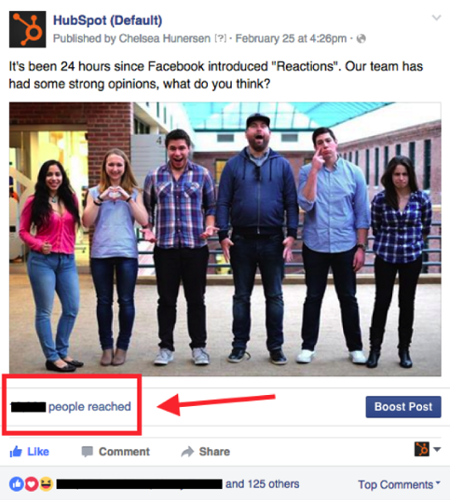 You’ll be taken to a screen that breaks down the numbers of each reaction net on the post itself and on the post shared elsewhere, if applicable.These posts will still only show interactions on a per-post level. Here’s what the post details look now: 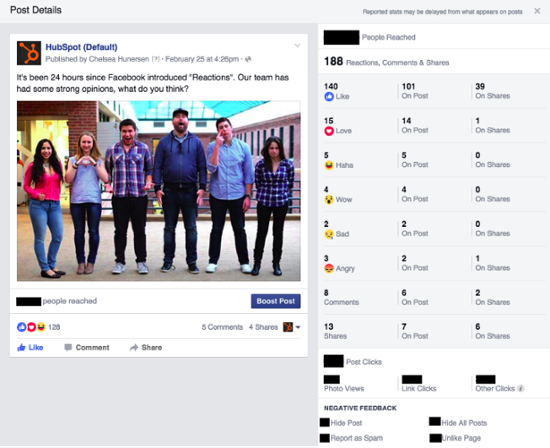 Another way to open Facebook Insights is by clicking “Insights” in your Page’s navigation bar, and then clicking directly into the post you’d like to analyze.

If you want to see which specific users have reacted to your posts and what their reactions were, then go to the post and click on each emotive icon for a list of names. 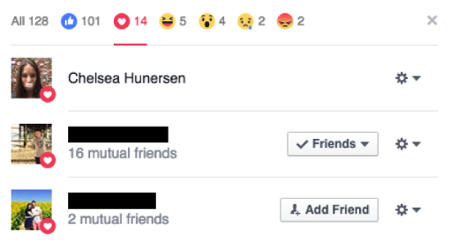 The same reactions are offered globally.

After first testing a whole myriad of emotive icons in Ireland and Spain, the folks at Facebook settled on the six reactions they believed were the most universally and easily accessible reactions for folks all over the world: Like, Love, Haha, Wow, Sad, and Angry.

They’d originally tested reactions like “yay” and “confused,” but eventually eliminated them because they proved to be too ambiguous for users. Whether Facebook ever decides to roll out any more remains to be seen, as they’re still testing — but they say there are no specific plans to roll out any other reactions as of now.

(If you want a more detailed breakdown of how the current reaction’s came to be, check out Geoff Teehan’s post on Medium.)

Only the first three reactions people take are shown.

You can’t remove a reaction.

Now that we have a better understanding of how the new reactions feature works, let’s talk about what it means for marketers.

The introduction of Reactions has definitely changed the Facebook landscape for brands. Now, marketers are armed with deeper insight into how their audiences interact with their content — which opens up a world of testing and experimentation. It also could really diminish the meaning of getting a Like on Facebook, which is something marketers will have to keep an eye on.

You now have deeper insight into how your audience interacts with your content.

Facebook’s reactions feature gives marketers a brand new feedback loop from their audience. Users who may not have previously wanted to Like your content (maybe because they didn’t enjoy it, or didn’t feel it was appropriate) are now able to send more specific signals about how your content makes them feel.

Since any reaction currently counts as a Like in Facebook’s algorithm, people who weren’t previously inclined to touch a brand’s content may now react to it, ultimately increasing the signal to Facebook that the content is worth serving to other audiences. This is going to become extremely important for brands as mobile becomes a bigger deal. Users who may not have wanted to use their phones to comment can now use them to “react” much easier.

Is this more diverse loop a bad thing? No! The exciting thing about this metric is that brands can now pay closer attention to how content is resonating with their audience, and then use that information to take specific actions.

Here are a few ideas for how marketers can gain better insight into their audience with reactions:

a) Test to see whether posts with certain types of reactions perform better.

Do posts that get more “love” end up performing better with your audience? Then create more lovable content. Do posts that “anger” users get more shares? Perhaps it’s time to stir the pot a little bit. (In a respectful way, of course.)

How can you test this? First, determine whether your metric for success is clicks or reach. Then, go into your Page’s Insights panel and sort the posts by that metric, clicking on each post to see which reactions they evoked.

Since Facebook only allows us to view these metrics on a per-post level right now, you may need to use a good old fashioned Google spreadsheet to tabulate results.

Note: Since many old posts may not have additional reactions, skip the sorting for now, and instead click into your most recent posts to determine a baseline.

In his book Contagious: Why Things Catch On,” Jonah Berger writes that people are more inclined to talk about things they love. Test this theory by running a campaign and see how much “love” you can dream up from your users. (Download a step-by-step guide to lovable marketing campaigns here.)

Once you’ve run the campaign, go to the Insights page and assess clicks, views, and shares to see if people are actually reacting to and spreading that lovable content.

People who are reacting with “love” to a lot of your posts may make for good brand evangelists. While Facebook currently does not segment these people right now, you may want to dig in to that “love” icon manually to keep an eye out for the names that are showing up over and over again. If you’re starting to notice certain people are “loving” posts often, consider keeping a list of these folks for opportunities so you can take the time to interact with them more on Facebook — and even send them great content later.

in the past, when a Facebook post has triggered a negative emotion for a user, that user has traditionally commented on that post, according to Facebook’s research. Now that users have new emotive options, this may very well change. Keep in mind that users who experience a negative reaction to your posts can now react faster — by tapping a button, rather than typing out a comment.

We may soon discover that this has a big impact on user behavior on Facebook, for negative and positive emotions alike. The biggest implication is that marketers like us may get a higher volume of feedback that is also generally less specific. Keep an eye on how how the comment volume changes compared to typical volume. Pay attention to the types of reactions you’re getting (especially on ads), versus the types of negative comments you may have gotten previously.

At the same time, stay wary of trends in positive or negative volume on your posts as a signal of customer feedback.

With all these new emotive options, are Likes going to be enough? In other words, if your posts are only getting Likes now, how do you know whether it’s resonating with your audience?

Don’t get me wrong, Likes are still important — but it’s safe to say the game has changed. Now, the act of simply Liking a post has become the path of least resistance. Yes, some people are still used to using the Like button, so this kind of affinity toward content is something to watch for over time. But as users get more accustomed to these different reactions, the bar for Facebook content quality is inevitably going to rise.

Remember: Any reaction is still better than no reaction. At the end of the day, you want your users to feel moved by your content.

This is only the beginning for Facebook reactions. As Facebook continues to make changes to ads, algorithms, and faces, it’s important for marketers like us to keep getting to know our audiences better, create great content, and appreciate our fans and followers. We will, of course, continue to share what we learn along the way.