These Are The Top Tech Sellers For The Holidays 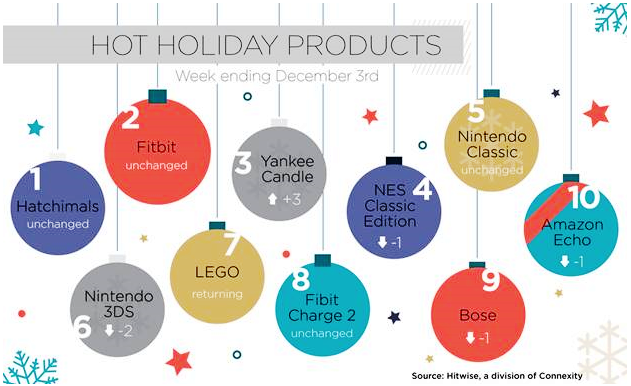 Hitwise, a division of Connexity that tracks online searches, said Fitbit was the most sought-after tech product last week, and No. 2 among all holiday items behind Hatchimals.

The lineup changed among tech enthusiasts, who were most enthralled by Google Pixel and Google Home (Nos. 1 and 2), followed by Nintendo Switch, Macbook Pro and iPhone 7, Hitwise said.

But The NPD Group, which tracks actual sell-through at point-of-sale, begged to differ. The Top Five categories for the week prior, which included Thanksgiving and Black Friday, were notebook PCs, home automation, sports toys, games/puzzles and streaming audio speakers.

The market research firm also gave huzzahs to instant print cameras for “noteworthy growth,” and to big-screen TVs which “are also making their mark on the 2016 holiday season,” chief analyst Marshal Cohen said.

Total sales for Thanksgiving week more than doubled from the preceding seven days, but were down 1 percent from last year, NPD noted.

For the bird’s-eye view we turn to D&H Distributing, the national tech distributor. Looking at the year overall, the company reported a whopping 77 percent increase in sales of IoT solutions (smart-home and Wi-Fi or Bluetooth-connected products); a 52 percent spike in 3D printing sales; and a 31 percent gain in TV volume, including streaming models.

D&H also enjoyed double-digit increases in floor care, notebook computers, fitness and exercise devices, and mobile phones, albeit against the backdrop of a “slow-to-grow” year for the distributor channel.

What lies ahead in 2017? To continue driving business, the distributor said it’s investing in programs, personnel and technologies to keep its retail customers competitive, and has high hopes for smart-home automation, home media hubs and augmented reality products as consumers look to “build infrastructures that will help them manage their connected-home devices.”